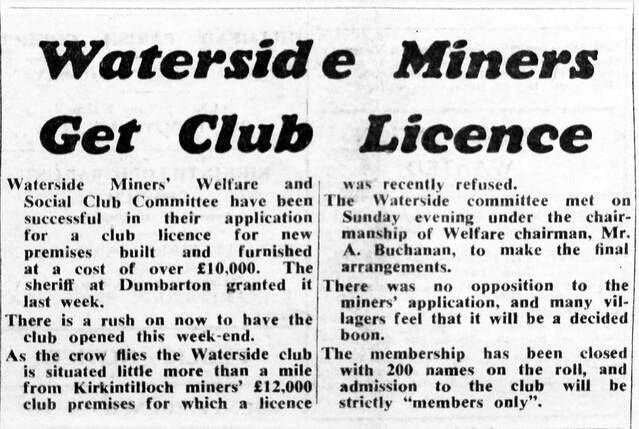 5 Jan.
A gift of £1 has been given to all retired miners and Club members. Cost: £29.
Treasurer’s report: income £33-13-6d; expenditure £190-19-3d.
Loss for December £157-5-9d. (The heavy loss was due to payment of rates, taxes and the children’s Christmas treat.)
William Nicol was appointed bar steward.
Welfare hall roof needed repair; it was decided to leave it for the meantime.
It was agreed that a TV would be rented from McLay’s of Kirkintilloch. Tumblers, cash register and microphone to be bought; also a set of books for running the Club to be ordered from CISWO.

12 Jan.
Cleaners and waitresses appointed; hourly rate to be 4/- per hour. Harry Bell chosen as Welfare hall caretaker (£2 per week). His mother to be the hall cleaner (£2 per week).
A second-hand piano to be purchased for between £75 and £100.

19 Jan.
The committee agreed that the Club would open on Sat. 25 January.
A pint of Ushers Gold Tankard Beer would cost 1/6d (ordinary beer would cost 1/3d a pint). Whisky would cost 2/3d per quarter, Gill lemonade being free.
A watchman would be started at £5 per week.
The Waterside Miners Welfare & Social Club was officially opened on Saturday 25 January 1964. 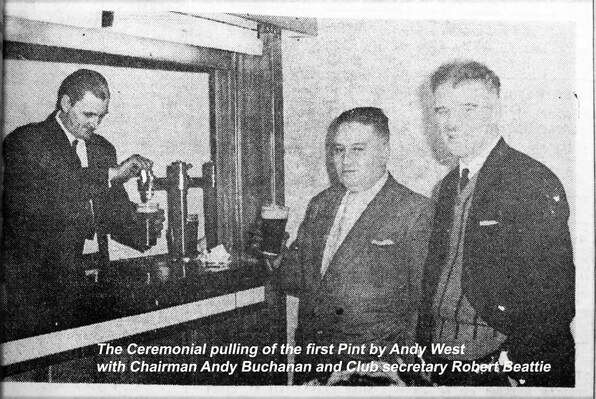 26 Jan.
A committee man and a member were suspended  from the Club indefinitely for fighting.
Slow service was a concern. To speed things up it was agreed that two men would be put behind the bar to run beer all the time and the bar steward’s son would fill whiskies ready to be lifted by the waitresses. In addition a committee man would be put behind  the bar to wash the glasses.

2 Feb.
It was agreed that Davie McDowell be offered a job as full-time watchman. If he did not take the job, it would be advertised. If he did take the job, a committee man would cover whenever he wanted a night off.

9 Feb.
Two part-time barmen were to be started (Wullie Smillie and Willie Brown) as well as three waitresses (Theresa Armstrong, Mrs McAlpine and Nancy Carr).
Dominoes and cards had to be signed for before being given out. Mr Smith, the joiner, to be seen about making a frame for the dartboard.

16 Feb.
The suspension of the committee man and a member for fighting would be lifted on 21 February.
As W. Brown had started behind the bar, it was decided that Danny McPhee would be engaged. It was agreed that the Club be open to non-members on Saturday mornings.
A letter to be sent to Rab Pender seeking entry to the Darts and Domino Leagues.

22 Feb.
A letter was read from Mr. Brown of Lenzie asking for permission to put in a piano that was gifted in the Welfare hall for use by the Sunday School. The committee granted permission but reserved the right to move the piano if they needed the hall for themselves. Mr. Gorrie of Waterside wrote asking if the Club could provide refreshments for an occasion in the Woodilee Hospital. The committee thought it best to seek the advice of Mr. Laing, the Welfare officer.  Club members CC and WF suspended until 23 May. Robbie Cunningham’s resignation from the committee was accepted. Mr. Smith, the joiner, was instructed to put springs on the toilet doors and a rail around the lounge as well as to make a mobile dartboard.

1 March
The giving of free drinks to visiting committee members was discussed, and it was agreed to stop this practice with immediate effect.
The Club secretary to contact McLay’s to put a switch on the amplifier above the TV. This would cut out the amplifier and not interfere with the viewing. Letter received from Mr. Walter Clark was left for the AGM.
Income for the month: £2466-4-1d.  Expenditure: £251-2-8d.
Mirror in ladies’ toilet to be lowered.
The committee decided that the Club would be open to non-members on Sunday mornings but still to be members only  on Saturday and Sunday nights.

8 March
Meeting was called to discuss the forthcoming AGM. Seats to be contested would be 1 Coal Board, 3 Union and 1 ordinary member. If there were not enough Coal Board or Union members, the committee would be filled with at least 9 miners, and the other seats would be filled according to number of votes. It was agreed that Pat Lewsley and Jim Hunter would stand for re-election. The committee agreed to make local councillors Strachan and Pender honorary members.

15 March
Letters received from CC and PF asking the committee to review their suspensions from the Club. The committee discussed this and decided that the suspensions were just and that they could see no reason to alter their decision.  The Club secretary to notify CC and PF of this. 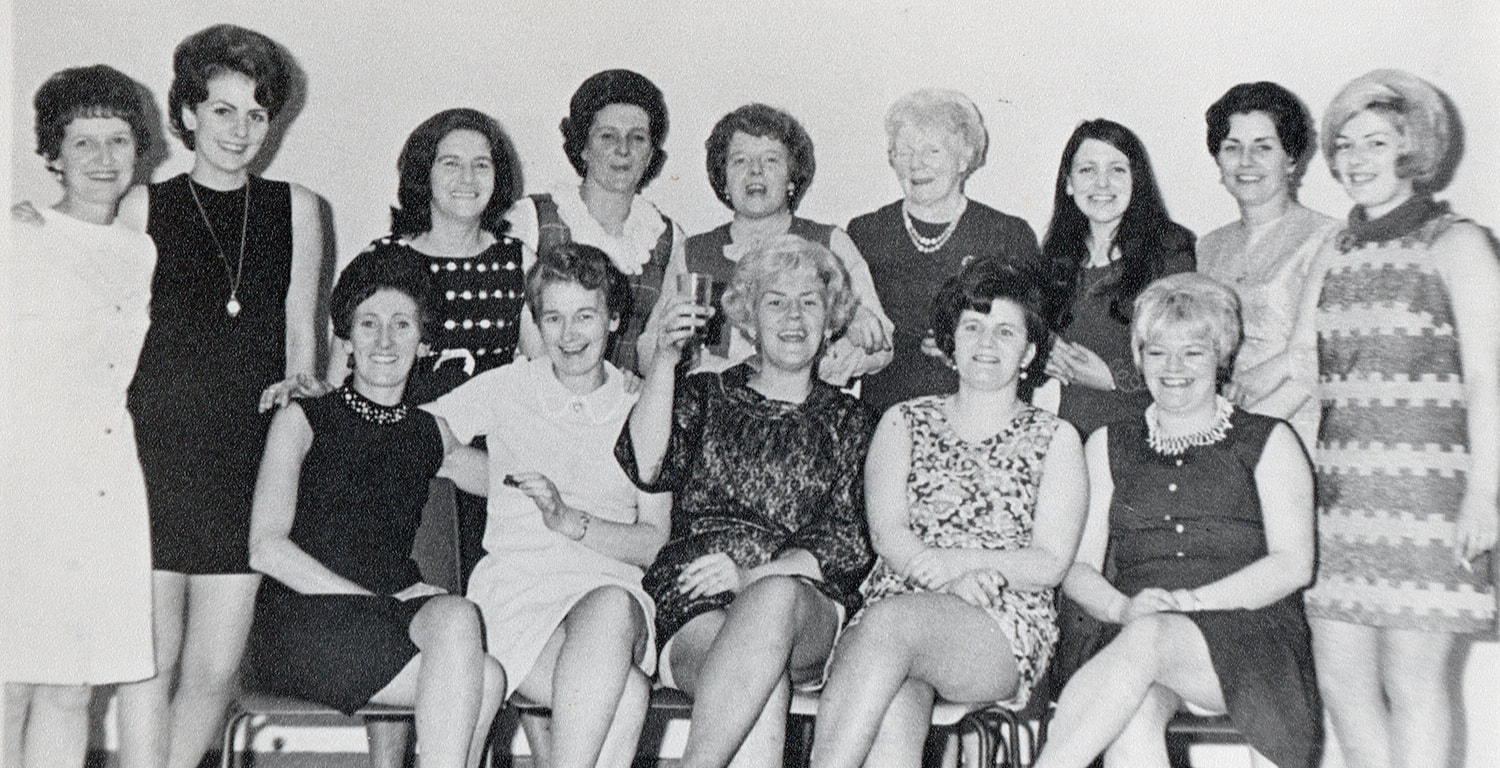 Waterside Miners Club gets licence – as there was no opposition to the application, the sheriff at Dumbarton granted a licence. Membership has now closed, with 200 names on the roll. Admission will be strictly members only.

Parked on pavement – Master painter John Tennyson from Blantyre was admonished  by Kirkintilloch JP Court after admitting parking a van on the pavement in Bankhead Rd., Waterside, on 19 October 1963.

The Waterside Club is popular – The Miners Club is now in its third week and functioning very smoothly.
We learn that Saturday and Sunday nights are bringing out capacity numbers.