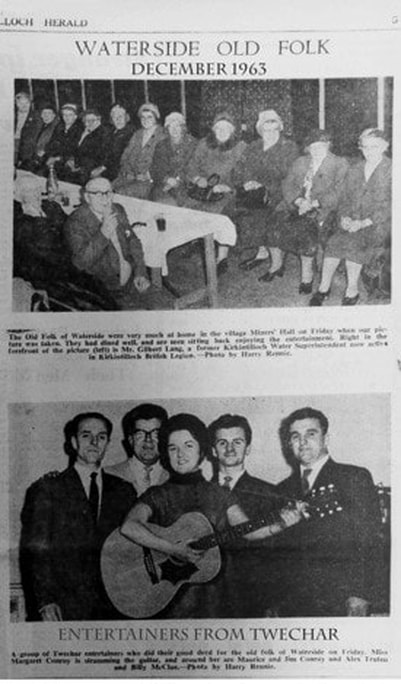 13 Jan.
W. Wright to write Mr. Laing, the Welfare officer, to clarify that
the new club had to be insured before construction was complete.

20 Jan. (special meeting)
This meeting was called due to the sudden death of Joe Brownisky – a sad loss to his family and the Committee; a wreath was taken to Joe’s home in Taig Rd, and five Committee members attended his funeral.

5 May
Arrangements for  summer drive to Burntisland complete. The two
lady helps and their children to go for free. Total cost £129.

21 Jul.
Emergency meeting called to discuss alleged disturbance at the Friday night dancing in the Welfare Hall [an episode in which local bobby PC Archibald had his hat knocked off in an affray with some rather inebriated local youths]. It was agreed that the dances be allowed to continue but that they would be stopped if there was another incident. 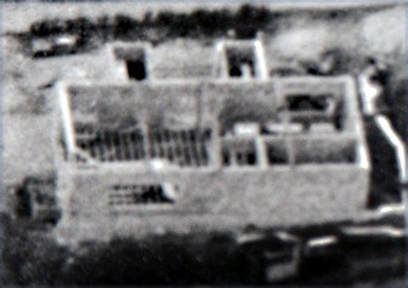 4 Aug.
The Committee was very disappointed with the rate of construction of the new social club.

1 Sept.
The Welfare Hall was let to Mr. Brown of Lenzie for use of the Sunday School. The Committee thought it best that the let should start at 3.15pm to  allow club members to be clear of the premises.

17 Oct.
Still great concern about the slow progress with the construction of the club.  Messrs. Morgan and Laing instructed to do all in their power to speed it up. Chairman A. Buchanan complained that rats were entering the new building. This would need attending to before the new club was opened.

3 Nov.
Chairman detailed the visit to Twechar and Ballieston social clubs by a deputation of Committee members and said that the help and advice of both clubs on running licensed clubs was greatly appreciated. It was agreed that a social night for the lady members be arranged (to take place on 16 November). A steak pie, tea, cakes and two free drinks would be provided. In addition a dance band and prizes for a Spot Waltz (one-pound and half-pound boxes of chocolates) were to be provided. Two displays of tables and chairs for the new social club were arranged for the Committee and their wives to view: the SCWS  selection on 9th November and the General Supply Company on 16th.

17 Nov.
The Committee was a little disappointed with the turnout at the ladies' social evening, but all the ladies present certainly enjoyed themselves, and voted it their best night ever. The General Supply Company was chosen to supply the new tables and chairs for the club. The weekly dances in the Welfare Hall would be stopped and future lets of the hall discussed by the Committee.

1 Dec.
The cost of the ladies' social totalled £15, the purvey £14-3/-  and  invitation cards 7/ [maybe the band was free]. Children’s Christmas treat finalised, tickets 1/- , the Welfare Hall, 28 December. Advert to be placed in The Kirkintilloch Herald and bills put up in the three village shops.

29 Dec.
The wage for the post of the bar steward was agreed at £16 per week. One night off a week would be granted, but this would be deducted from the steward’s wages.